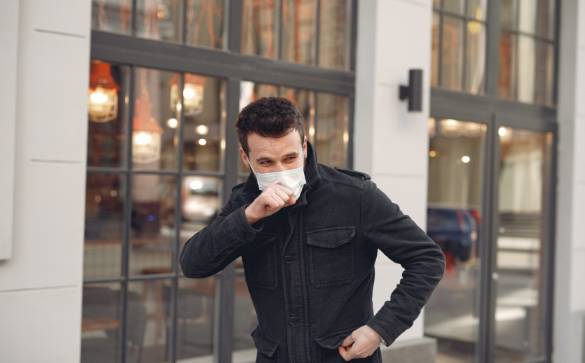 Bronchitis is commonly referred to as a "chest cold". It is an infection that causes inflammation in the lungs. It is a minor, but a miserable, infection. Bronchitis commonly follows a severe condition like chronic smoker's cough, or a simple viral infection like the common cold.

Exposure to chemical irritants, smoke, or bacteria can also lead to bronchitis. The common symptoms of bronchitis include a cough, phlegm, and exhaustion. These symptoms occur in many other illnesses as well, so getting the right diagnosis is important.

Bronchitis falls into two types – acute or chronic. Both can last for a matter of weeks, but there are some distinct differences to watch.

Acute bronchitis, as the name suggests, lasts for a shorter span and has milder effects. It often follows viral infections like a common cold or flu. The symptoms include chest discomfort, fever, cough, and shortness of breath. The disease usually lasts for a few days or weeks.

Chronic bronchitis is a serious condition characterized by a persistent cough. It lasts for a longer duration of at least three months every year for two years. People suffering from chronic bronchitis exhibit various degrees of breathing difficulties. The symptoms might improve or worsen during different parts of the year.

When chronic bronchitis is accompanied by emphysema, it becomes a chronic obstructive pulmonary disease (COPD).

Bronchitis occurs due to the inflammation of the bronchial tubes by bacteria, viruses, or other particles. Bronchitis also occurs from exposure to substances that irritate the lungs. Things such as dust, air pollutants, tobacco smoke, fumes, or vapors can cause a flare up. Furthermore, repeated occurrence of acute bronchitis also leads to chronic bronchitis.

The primary symptom in bronchitis is a cough that can last for several days or even weeks. Other symptoms include:

Fever as a symptom of bronchitis is rare and might be an indicator of pneumonia or flu. It is also common for the symptoms of chronic bronchitis to worsen a couple of times, especially during the winter months.

People suffering from bronchitis are often administered OTC cough suppressants and pain relievers. They should also rest and drink plenty of fluids. Many cases of acute bronchitis clear up after they run their course, sometimes without treatments. Nevertheless, to relieve the symptoms, doctors may prescribe the following:

• Cough medicine to bring up mucus and to remove irritants from the lungs.

• Bronchodilators to open the bronchial tubes and clear out mucus.

• Mucolytics to cough up sputum.

When To Consult A Doctor

Though most cases of bronchitis can be treated at home, you need to see a doctor or medical provider in case you experience:

Diseases like chronic bronchitis require urgent care from a medical practitioner. If you are in need of immediate attention, you can depend on centers like BASS Advanced Urgent Care in Walnut Creek. Contact us today for thorough care for yourself or your family.