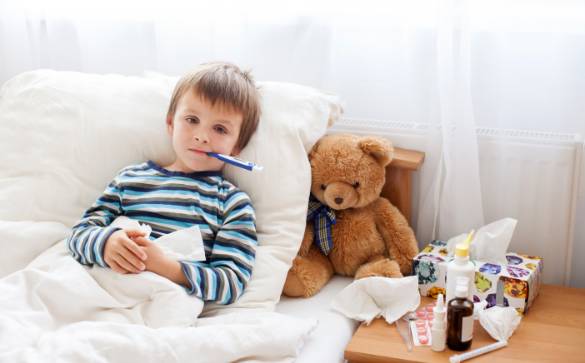 Roseola is a common infection with small children.  It is also known as sixth disease.  Kids who get roseola usually contract the disease between the ages of six months and two years.  Most children have roseola before they enter kindergarten, so parents should not be too concerned if or when their kids catch the virus.  Adults also sometimes get the roseola virus.

The sickness is caused by two strands of the herpes virus.  There are more than three million cases of roseola recorded every year in the United States.  Here are some facts you should know about this common infection.

Although roseola must be diagnosed by a medical professional in order to know for sure what it is, there are some telltale signs and symptoms of the disease.  Roseola starts with a high fever that lasts for several days.  A rash then pops up once the fever has broken.  Roseola rash looks like small pink spots all over the skin.  It usually starts on the chest, back, and abdomen, and later spreads to the neck and arms.

Other possible symptoms of roseola include:

Contact a doctor if your child experiences these symptoms, as it may be roseola or another disease.  Children often don’t show signs of roseola until a week or two after coming in contact with the virus.

Roseola treatments encompass several steps.  Fluid replacement is very important for roseola patients.  This replenishes water and nutrients in the body.  Bed rest can also be beneficial for children with this virus, but is not always necessary depending on the severity of the patient’s symptoms.

Medication is also commonly used to treat roseola virus.  An analgesic, or pain relieving, drug is often used.  Acetaminophen, the drug that is often known by the brand Tylenol, is strong enough to reduce any discomfort caused by roseola.  A nonsteroidal anti-inflammatory drug can also be taken.  This includes ibuprofen, which reduces fever, relieves pain, and helps decrease inflammation.  Advil is the brand that sells this drug.

Roseola will pass on its own and does not necessarily need to be treated by a doctor.  Pediatricians can diagnose and help treat roseola virus.  However, if your child is experiencing an especially severe case or has other health issues combined with roseola, taking them to the emergency room may be a good idea.  This includes an extremely high fever (over 103 degrees) or a fever that lasts more than seven days.  Roseola rashes that last more than three days should be escalated to a doctor visit as well.

Roseola is very contagious and spreads easily.  The virus spreads by airborne respiratory droplets such as coughs or sneezes.  It can also be passed through saliva, like kissing or sharing drinks, and skin to skin contact, including hugs and handshakes.  Roseola can even be contracted by touching a contaminated surface, such as a blanket, doorknob, or table.

Because roseola is so contagious and there is currently no vaccine to protect against the disease, the best way to keep your child from contracting roseola is to keep them away from sick kids.  If your child gets roseola, keep them home and away from other children until their fever has broken.